As part of the retrofit of the existing North American headquarters in Teterboro, NJ, Symrise converted 10,000 square feet of traditional, hard walled offices into a new open plan workspace and collaboration area. The 1st floor fragrance office project was completed using a phased approach due to the limitations on available space for displaced Symrise employees. 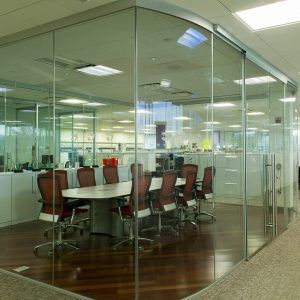 The project focused on providing interaction and informal meeting space where employees were encouraged to collaborate and share ideas and information. The 1st Floor Fragrance Office was designed to replace the thirty five private offices by fifty four new public and semi-private workstations. The conference rooms, collaboration areas, and semi-private offices all used glass instead of traditional hardwalls for a variety of reasons.

First, the glass followed our design parameters of creating a more team-friendly atmosphere. The glass allowed employees to communicate from one area to another significantly easier. This is very beneficial especially in the collaboration areas where group work is encouraged. The second reason for going with glass was to increase the amount of natural daylighting. Bringing the natural daylight deep into a space where there are no windows on three walls is very difficult to achieve. The use of the glass partitions was paramount to drawing the light into each workstation. Natural light has been proven to boost productivity and create a warmer, welcoming area.

The 1st Floor Fragrance Office update was the first phase in a series of projects designed to change the culture of the company. Symrise’s North American headquarter’s new approach was to reflect the international approach currently in place at Symrise facilities worldwide. In addition to the cultural changes, the project was designed for USGBC Gold Certification for Interior Construction. This reduced overall power consumption, increased the control each employee had over their lighting and temperature, improved ventilation and utilized sustainable building components.

The 1st Floor Fragrance Office update was a huge success. Farrell Partnership went on to redesign nearly every office in the entire three-story facility.